Bike Sharing – and What Media Companies Can Learn from Chinese Startups

Shanghai, 06/13/2018. It is a true phenomenon how fast mobike is growing. Founded in early 2015, three years later it is now a multinational group of companies with 200 million registered users, who perform 30 million bike rides per DAY (equivalent to about 900M unique visitors per month, all mingling with each other).
Initially inspired by the idea of bringing back the “bike age” to China in order to reduce the smog created by the vast amount of car traffic in China’s metropolitan cities, the founder, Mrs. Weiwei Hu did not stop at China’s borders, but instantly expanded into other countries. It now covers 200 cities on most continents, with Washington D.C., San Diego and Dallas being the most prominent cities in North America, and London, Paris and Berlin in Europe.
Although there are many competitors, mobike is incredibly successful. The “first generation of bike sharing is said to be a community in Amsterdam, in 1965 – which failed because the bikes were quickly lost or heavily damaged. For 30 years, the idea lay dormant. But in 1995, the city of Copenhagen in Denmark tried it again, this time with coins, which served as a deposit (“second generation”). Vandalism and theft were still huge issues, but the idea revived. The “third generation” was introduced in 1996 in Rennes (France), where the user had to return the bike to a specific docking-station. In 2000, the state-owned German railway company, Deutsche Bahn, provided bike sharing on all their major railway stations which could be rented via an App and which were unlocked by SMS – that’s the “fourth generation”.
Mobike copied this idea (although they claim to be the first), but they executed on it much better: While Deutsche Bahn believed Bike Sharing was a mere service to their customers (kind of an additional cost factor) mobike understood the real market potential, improved the user experience even further and executed the idea on a global scale.

Mobike’s bikes are iconic. They not only look different with their orange-colored, five-spoke car-like wheels, but the whole bike is re-engineered in order to optimally support its purpose, and to reduce maintenance costs to the minimum. The core element of the bike however, is the lock. The lock includes a SIM-card and a GPS-location device together with a battery which is charged by a dynamo integrated into the front wheel, or by a solar panel. The bike sends its position to mobike’s central computer and mobike’s app will show you all the available bikes in your area. When you pick one, you scan a code on the bike with the app and the lock will open up. Now the bike is yours for up to two hours. You pay a deposit in advance (which includes insurance too) and you will be charged by the time or by a flat monthly fee. 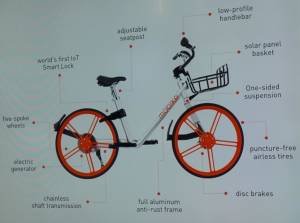 While the first version of the bike was very heavy, the most current version (V.04) is light and comfortable. It has gears, a shopping basket and a raiseable seat, which fits North-American/European leg lengths well. The rest of the configuration depends on local traffic laws. While the first version had a specific, chainless traction system (in order to reduce maintenance), the newest version has a chain: The lesson had to be learnt, that even though the traction system wore down more slowly compared to chains, it still needed maintenance every now and then – and this maintenance was significantly more complex and generally too difficult for the maintenance staff. In addition, the bike rider needed more strength to peddle the bike.
The founders of mobike spent the whole of 2015 on prototyping this and on forming partnerships, manufacturers and financing partners. In spring 2016, they went public. Within two years, more than 9 million bikes were produced and distributed all over the world. Whilst the first bikes must have been expensive with all the specific engineering, the current production costs are expected to be very low. The rental price varies according to the economic wealth of the area where you rent (your app serves as a global account). In the US, the cost is about $1 for a 30-minute ride. In Chengdu (China), the daily use of mobikes already exceeds the number of people using the (very efficient) metro system!

Function and Design does the trick for Marketing, too

A mobike stands out from the crowd at first glance, which clearly helps to reduce marketing costs. Basically, when entering a new city, mobike simply talks with the local government on the local laws, license requirements and approvals, and – after having fulfilled all these requirements quickly – they typically post pictures with the local government and then distribute the bikes into the streets, close to bus and metro stations. This instantly creates buzz, which is self fulfilling” – the more people share the news, the better.

Piles of Bikes in Crowded Cities

As there are so many competitors in the bike sharing market, some cities in China and Europe already have problems with masses of bikes blocking the common space on sidewalks and streets. In 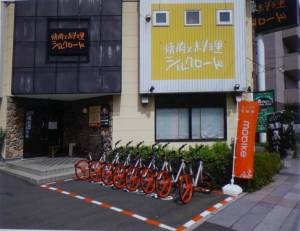 Europe, urban administrations are already discussing putting extra taxes on bike sharing businesses for using municipal facilities. Whilst the original idea of the “Fourth Generation” bike sharing was to get rid of the docking stations, and to allow the user to leave the bike wherever he or she wants, this obviously now creates issues with the cities and towns. As a mobike user is already scored today (the next user of the bike can rate if she found the bike in good order), mobike now wants to teach their users “good behavior” by introducing an incentive system: Whoever returns his bike to marked bike-parking areas (checked by geo-location) will receive credit points – allowing free bike rides (and the like) later. Mobike is looking for cooperation partners who want to provide such parking spaces in return for rent and/or marketing exposure.

As in most committed communities, the mobike community also developed its own behaviours: for example, there is the “Singapore bike patrol”, who spend their leisure time on maintenance and repair of mobikes; in China there are “bike hunters “, who spot hidden/lost bikes and bring them back into circulation; and in Asia and even in the UK there are couples, who get married on mobikes …!

But now: What is in this for a media company? Here are two ideas on how to use the mobike hype in a media company:
First, for B2B or scientific publishers: mobike gathers huge amounts of data – 40 terabytes per day – from their bikes. Occasionally, on city management’s request, mobike uses this data to give advice to the town, on where to build new bike tracks etc. But mainly, the data is used to improve the operation – to distribute more bikes into the right places and to send out bike maintenance teams or to get displaced bikes back into the city hubs. However, you could license the data and do more sophisticated data analysis on it, aggregate it with other city traffic statistics, and resell this to traffic operators and other cities’ traffic administrators.
The second, for public media or media agencies: You can sell branded mobike crowd-events to advertisers (mobike did a Disney-Campaign to raise money and attached Daisy-pictures into the wheels and her bow to the handlebar). You can extend this to other sorts of branded events, for example to health insurers or other brands who want to increase healthy activities or who are focused on physically active communities. Mobike could also agree to bikes painted and designed by advertisers, if such a cooperation would help spread business even faster into new geographical locations.

Lesson to be Learnt: Execute on Your Ideas and Go Global

In conclusion, the mobike story is a great growth lesson, which basically tells us that just having a good idea, does not necessarily do the trick: You need to execute professionally. Furthermore, some market niches represent global market needs. We need to think and play our cards globally from the offset instead of focusing only on our local markets. At least, this is how China will play the game from now on.