Mittelstand is a German word that has no perfect translation into English, but incorporates all that we think of as best about the German culture. The literal translation means “middle class,” but it has strong connotations of responsible, socially engaged, public-spirited, long-term employers who look after their employees and community alike.

The Mittelstand Grand Prix is awarded annually by the Oskar Patzelt Foundation to businesses that have made special achievements in the areas of corporate development, innovation (research and development), community involvement, marketing and customer service, in addition to employment and training excellence. 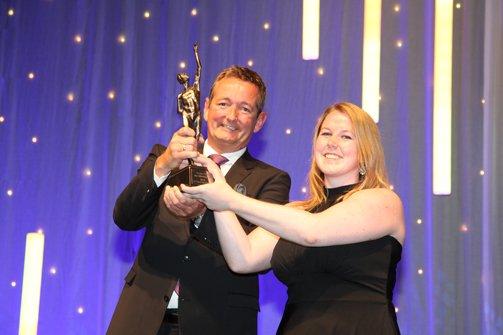 Knut Nicholas Krause, CEO of knk Business Software AG, said: “We are delighted to receive this award. It is not only an acknowledgment of the company, but above all for its employees who, by their commitment, creativity and exceptional performance, brought knk to where we stand today. I am very proud to work every day with such a team. Many thanks.”

knk was first nominated for the Mittelstand in 2012 by the City of Kiel and CreArte Change Management KG, and was a finalist in 2014.

Nationally, all participating companies in the 2015 competition employed about 900,000 employees, created over 10,000 new training opportunities, and engaged more than 50,000 young people.

About the Mittelstand Grand Prix:

Each November, the Oskar Patzelt Foundation tenders through municipalities, trade associations, institutions and companies, inviting nominations for outstanding medium-sized companies. Companies in industry, services, trades, and crafts are eligible for proposal. In addition, special prizes are awarded for the “Premier” and “Premier Finalist”, for the “Community of the Year”, and “Bank of the Year” awards.

Selection of the winners and finalists is made by twelve regional and one national jury. Finally, three companies are announced as winners, and five more as finalists.

In 2012, the Mittelstand Grand Prix reached the top 10 best list of German participants in the EEC’s “European Business Award”.